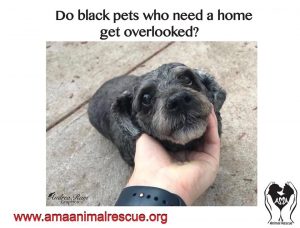 With February being the month of love, there is nothing better than sharing and spreading the love. Sadly though certain adoptables are overlooked not because of their breed, size or any factor other than the color of their coat. This phenomenon is known as Black Dog Syndrome; but is it a myth or is there any truth to the theory?

The theory goes that black dogs and cats are less likely to be adopted and are therefore more at risk of ending up on the euthanasia list. If you look at shelter statistics, there is definitely more to this than meets the eye. First of all, a much higher percentage of shelter animals are black and therefore, even though a higher percentage are adopted there’s still a lot of black pets that do end up on the kill list. The data, when examined closely, debunks this theory as simply a myth.

Many shelter workers will still insist that Black Dog Syndrome is very real even when faced with the statistics. Most will tell you that it is harder to find homes for black pets than any other color, and although statistically this cannot be proven, there does seem to be some truth to this. The reasons can range from old-fashioned superstitions to the portrayal of black dogs in film and television. There are many people who to this day believe that black cats are bad omens or bring bad luck. Likewise, black dogs are believed to be evil. In modern media black dogs are often portrayed as vicious and dangerous, creating a stigma around them regardless of breed.

Another reason that we at AMA can attest to is the fact that black pets are harder to photograph. Their dark fur creates shadows on camera and oftentimes their pictures simply resemble big blobs of fur, when in reality they’re usually super cute! With social media being what it is in today’s culture, nothing sells better than a pretty picture.

So perhaps next time when you’re considering adopting your new furry best friend, don’t judge a mutt by his mug… a big black fur ball might just steal your heart if you look past the color of his coat!