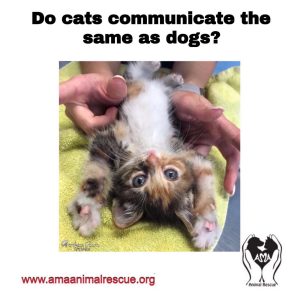 As with dogs, cats also communicate using body language. These two household pets have always been ‘at war’ with one another and unfortunately, cats are seen as the moodier, more temperamental of the two. This belief actually isn’t true, the problem is that most people think that cats and dogs have similar body language and therefore a cat’s signals are misinterpreted. Cats have their own way of communicating, and what might seem to be a friendly gesture in a dog could actually be a defensive one in a cat.

Cats use mainly three body parts to communicate; eyes, ears, and tail. Although each of these can signal how your cat is feeling, it’s best to read into your cat’s body language as a whole instead of focusing on just one single body part. Often times Mr. Whiskers might be curious yet also defensive but the latter is only signaled in one of these talking points. To best understand your cat, get to know their nuances and learn to effectively read their unique ways of communicating. After all, no one knows Mr. Whiskers like you do!

A cat’s tail is often their most effective way of communicating with their human. When a cat’s tail is up with a slight tilt forward, this usually indicates a happy and content kitty. A tail that is hanging low, tucked underneath or wrapped to the side means your cat is most likely nervous or even a little scared. A cat’s wagging tail also bears significance. A slow steady wag can signal that your cat is content and observing, for instance when he’s staring out the window watching the birds outside. When his tail is wagging rapidly though, this signals agitation and could potentially lead to some aggression. Finally, we have the ‘Halloween-cat-tail’ which is a very well known pose in cats. This is usually coupled with an arched back and raised hair. The pose itself is a defensive tactic and makes the cat seem larger than it is when threatened. When your kitty does this, it’s a sure sign to back off.

Your cat’s ears and eyes are also great indicators of his mood. For instance, when his ears are slightly forward he is signaling contentment and playfulness, when his ears are slightly back he might be feeling anxious or overstimulated. When his ears are back and flat against his head this should also be seen as a clear warning sign to back off. When it comes to a cat’s eyes a dilated or constricted pupil may signal different moods, but this may also be due to the available light so these aren’t always accurate indicators. Slow blinking or half-closed eyes usually signal that Mr. Whiskers is feeling content and comfortable in your company, whereas staring at you could possibly mean he is challenging you. Cats often see eye contact as threatening and this is why they gravitate towards the person in the room who is actually trying to avoid them.

Besides these three main modes of communication, there are also some other cues to watch out for. The tummy display, for instance, could potentially be a happy cat stretching out or it could be a survival tactic when your cat feels threatened. It’s important to know the difference when playing with Mr. Whiskers. Your cat may also give verbal cues. Although cats are not necessarily verbal animals, they have adapted over time to use their vocal chords to communicate with their humans. Each cat has their own unique voice and may meow differently for food or attention.

Just like a mom with a newborn baby, you get to know the little ways in which your baby, or in this case Mr. Whiskers tells you what they need. Tune in to this and get to know your kitty like only you can. A piece of cake, right?