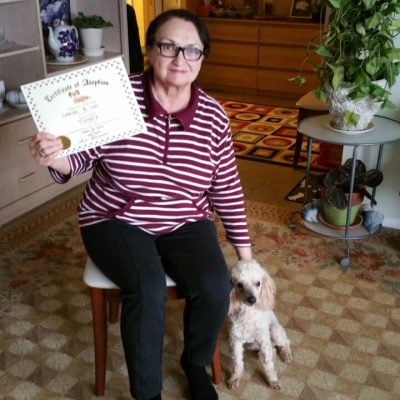 The only thing that Tommy did wrong was that he tried to protect his elderly owner who was lying sick in bed. But the woman’s home attendant decided it was a reason enough to throw him outside during these cold winter days.

His previous owner is a 90-year-old lady, who got very ill and wasn't able to take care of herself, let alone of her 8-year-old poodle. Can you imagine how confusing it must have been for her dog, who loved his human and didn't understand why, out of nowhere, she doesn't move anymore? All those strangers in the house made Tommy scared, and all he wanted to do is to protect his human. Nobody explained to him that they are here to help her. All he saw were the tubes, loud machines, and constant screams at him to stop growling.
We were contacted by a friend of a friend, who knew one of the home attendants. We were given a day to come and get the dog, or else they were going to put him on the leash, somewhere far away from their building, and leave him there to die.
When we came with our trainer the next day, we found out that the dog spent the night outside (15 F) and for the last few days he was sitting, tied up to the balcony door. He was not allowed to walk or even go visit his human in the next room.
We spent an hour trying to make friends with him, but all he wanted to do was to go to the room where he was not allowed. We were finally rushed to leave, and take the dog, so we did.
Two months of hard work we finally were able to find a happy ending for this little guy. Enjoy the rest of your life, Tommy!